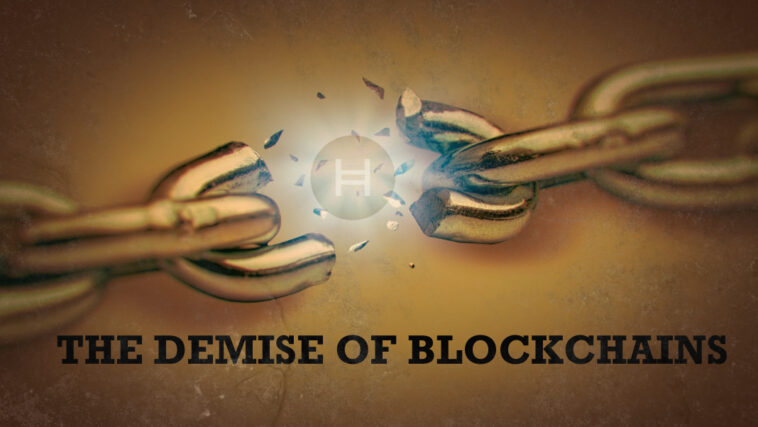 Blockchain technology was never designed to cope with the incredible demands placed upon it today. Bringing distributed ledgers to the masses requires speed, security and scalability as well as decentralization, all wrapped within a secure, bullet-proof architecture.

Satoshi Nakamoto’s Blockchain 1, however, has slow baked in. If blocks take less than 10 minutes to mine, that’s a problem. Solution: increase the difficulty. If it’s too fast, it becomes unstable. It NEEDS to be slow. Subsequent networks have either made incremental improvements or risky compromises. Launched 7 years ago, Ethereum currently executes 15 transactions-per-second to Bitcoin’s 7.

Vitalik Buterin himself refers to this problem as the “Blockchain Trilemma“

Blockchains cannot deliver security AND scalability AND decentralization. If you want two of these, the other will be compromised.

Developers have struggled for years to overcome Blockchain’s scaling difficulties, some more successfully than others. Bitcoin’s ‘Layer 2’ lightning network has arguably made the best progress. Layer 2 solutions on Ethereum also show promise, although they have suffered at least one significant attack:

Other protocols have thrown caution to the wind and made risky compromises. Solana, the darling of 2021 Defi has suffered many attacks, resulting in significant downtime, owing to its preference for speed over security.

Charles Hoskinson himself has referred to Cardano as

“…this very scarce resource that is your layer 1”.

Sharding is often touted as a solution to the Blockchain scaling problem, where you split your network into many sub-networks to augment transaction throughput. Sounds promising; so how would a sharded private implementation of Ethereum stack up against a pressing need that’s currently out there in the market?

356 billion US retail coupons were issued in in the US in 2018, and an immutable means of issuing / redeeming them would enable manufacturers and retailers to eliminate $ millions in coupon fraud.

356Bn gives you an average of over 11,000 transactions per second. At Ethereum’s transaction throughput of 15 per second, you’d need around 1,000 shards, each with their own set of validator nodes.

Tens of thousands of computers would be required. Not happening any time soon.

Blockchain scaling is a huge challenge, but Blockchain apologists reassure us that the industry is still in its infancy, and that all these problems will get ironed out in the fullness of time.

However, a new technology that solves all of these problems will soon be freely available.

In 2022, the Hedera Governing Council is calling time on Blockchains.

Hedera, the exclusive licensee of the Hashgraph Consensus Algorithm is buying it outright from Swirlds, the patent holder, and making it open-source under an Apache 2.0 licence.

So, should you build a Blockchain, or a Hashgraph?

The choice is straightforward. Dr Leemon Baird of Swirlds, founder and Chief Scientist of Hedera and inventor of the Hashgraph Consensus Algorithm, designed Hedera’s Hashgraph to be:

• The most secure a distributed ledger can possibly be mathematically

• That can be deployed across multiple nodes and shards

• With transaction finality in 3-5 seconds

All from the ground up. In the video clip below, Dr Leemon Baird explains how it works:

No other distributed network in existence today can claim to have all of these properties. Hedera’s Hashgraph gives you the best possible security, with decentralization baked in at the protocol level, and capable of scaling to any conceivable size.

Now that the Hashgraph Consensus Algorithm is open-source, you are free to deploy your own Hashgraph in any which way you like. Whether your Hashgraph is a private implementation for your organisation or a semi-public one where you have full control but with public access (a Central Bank Digital Currency for instance), Hedera’s Hashgraph will work for you straight out-of-the box.

If you want to create a fully public, permissionless and decentralized network like Ethereum on a Hashgraph, you’ll have the code to implement it, but like all such open networks, you will need to get the governance and tokenomics just right. Too many votes in the wrong hands could spell disaster.

The best governance model is one that aligns the interests of all participants. In order to be permissionless (anyone can run a node) and secure, you need to implement a native cryptocurrency within a Proof-of-Stake consensus mechanism to manage voting on the network. The cryptocurrency must be widely distributed and too valuable for a bad actor to accumulate more than 1/3rd of the supply, which would enable them to disrupt consensus.

2/3rds would enable them take over the network entirely, as happened to the Steem network at the hands of Justin Sun:

You need to attract developers, use-cases, drive adoption and create value. The more value you create, the more secure you become. A huge undertaking.

Hedera has made significant progress along this path, with the Hbar (its native cryptocurrency) valued in $ billions by market cap, over 600,000 network accounts, many use-cases deployed and generating significant transaction throughput.

Hedera’s network has already overtaken Ethereum in the total number of transactions executed.

For a network less than 3 years’ old, it’s an incredible achievement. Hedera’s approach would be one to study carefully when deciding how best to deploy. Its development strategy is particularly cautious, given that its network participants are primarily enterprises with big use-cases, and that many of its Governing Council members are large enterprises building on the network.

No room for mishaps. Hedera is instinctively conservative, especially when it comes to regulation, and this will pay off handsomely when regulation finally comes.

Hedera is making great strides on its path to full decentralization, but it is still currently a permissioned network. Having made its code open-source, the next planned step is to allow trusted community nodes, scheduled for 2022. We should also see staking and sharding implemented this year, and after another significant leg up in the Hbar price and network adoption, Hedera will take the final step, flinging the doors wide open and allowing anonymous nodes.

Hedera plans to be around for 100 years. It always has, and always will play the long game.

But if you can find a way of being permissionless successfully from day one, go for it! No need for Layer 2 scaling solutions if your project turns out to be wildly successful. Miniscule transaction costs, a vanishingly small carbon footprint, all wrapped up in a level of security that is as strong mathematically as a distributed ledger can be:

Asynchronous Byzantine Fault Tolerant. Hedera even has a math proof for it:

It’s a level of security that no Blockchain can claim. Not even Bitcoin.

Your Hashgraph will be able to do things that Blockchains can’t, such as guarantee the fair ordering of transactions. If you want to run a stock market on a Hashgraph, help yourself. Airline ticketing? Energy/carbon trading? No problem. You can rustle up any kind of market place you want, and provide mathematical guarantees that your users’ bids and asks are ordered fairly.

As a developer of a new network, a Hashgraph is your best choice by far. If you choose a Blockchain, you risk being outcompeted by a rival Hashgraph.

The open-sourcing of the Hashgraph Consensus Algorithm is a sunset moment for Blockchains.

Although the next generation of distributed networks will be Hashgraphs, Blockchains will still be around for a while, and will remain relevant as long as their communities continue to value them. The first sign of displacement will be a migration of Blockchain developers towards Hashgraph projects, as developers are hired to support the network architecture of the future.

Blockchains won’t be participating in the next wave of distributed ledger adoption because the large-scale use-cases waiting in the wings require the kind of performance and low cost that only Hashgraphs can deliver. Hashgraphs will be able to take on the likes of the Visa and Swift networks, operating a fraction of their cost and carbon footprint.

The smart cities that require billions of daily transactions will finally have the throughput they need.

Most importantly, Hashgraphs will provide the infrastructure needed for the Web3 revolution.

So where does this leave Hedera? At the epicentre of Web3, Metaverses and the new Internet economy.

But because of its ability to scale, Hedera’s impact will be felt globally, meshing itself into every industry, every government, every city and every strata of society.

All Hashgraphs will interoperate easily with Hedera. You may be doing your primary business on another Hashgraph, but where would you prefer to secure your financial assets? On the original, the biggest, most widely adopted, most decentralized and most trusted Hashgraph of them all.

Because transaction fees on Hedera are fixed and so low ($0.0001 for cryptocurrency and consensus transactions, $0.001for tokens), small-to-medium sized projects (i.e. the majority) are more likely forego the equipment and development expenses required to build their own networks and simply set up shop on Hedera.

But, because Hedera is able to onboard any number of projects for the same fixed fees due to its ability to scale, Hedera’s network effect will be orders of magnitude greater than any Blockchain project has experienced to date.

Rival public clone networks are bound to emerge in the coming years, and although they will be able to launch quickly using Hedera’s software, they will have to go through all the growing pains that Hedera has experienced over the last three years in attracting investment, onboarding projects, generating transaction throughput and growing the value of their native coins.

The one critical aspect no public Hedera clone will ever be able to match is Hedera’s governance. Established institutions care deeply about their reputations, and would far rather govern the original innovator than any copycat imitator.

Hedera’s governance is one of its greatest achievements. Its membership includes household names and highly respected academic institutions. Governing members are decentralized over different industries, geographies/states, and through time, with a maximum consecutive term of 6 years.

The Council’s commitment to the success of the network is proven. It has given 20% of the Hbar supply to the Hbar Foundation, a separate organisation dedicated to the promotion and adoption of the network.

At today’s Hbar price, that’s over a BILLION dollars. As the price appreciates, this war-chest will become eye-wateringly impressive.

Hedera is buying the Hashgraph Consensus Algorithm from Swirlds, and giving it away.

In the brave new world of Metaverses and Web3, Hedera will become the ultimate source of truth.

The trust layer of the Internet.

What impact will this have on the Hbar market cap?

I can scarcely begin to imagine. 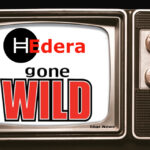